Today, we delve deep into the ship and its design. It is important to discuss the ship because it is home to our own character, which has not been revealed yet, as well as your companions.

I have mentioned Angelic is a narrative turn-based strategy RPG and underlined the importance of our companions. Gameplay-wise, we call them “heroes”. Narrative-wise, they are your companions. In the next diary entry, we will talk about your companions’ roles and functions, and in this entry we will focus on your “home” in the world of Angelic.

Its most important feature is, however, something incredibly significant: Osiris is the ship of Iset the Mother. In other words, it is a ship that belongs to a goddess.

Many revere Iset (also known as Isis) as a goddess because of her immense power and technological advancements. Like all neo-humans, she was once a human. After hundreds of years after her transcendence to neo-human form, her wisdom, technology, and capabilities have advanced beyond comprehension. She is called “the mother” because she has created a lot of neo-humans so far, most of them are significant characters.

Good news for you, you are commanding her personal ship: Osiris. You might ask why and how… I am afraid you will have to wait a little longer to explore the answers to these questions.

Let me continue with the ship’s design: We knew from day one that Osiris must be a sleek, elegant, and ultra-techy vessel. At the same time, the ship must inherit some design elements from Iset, its master and engineer. 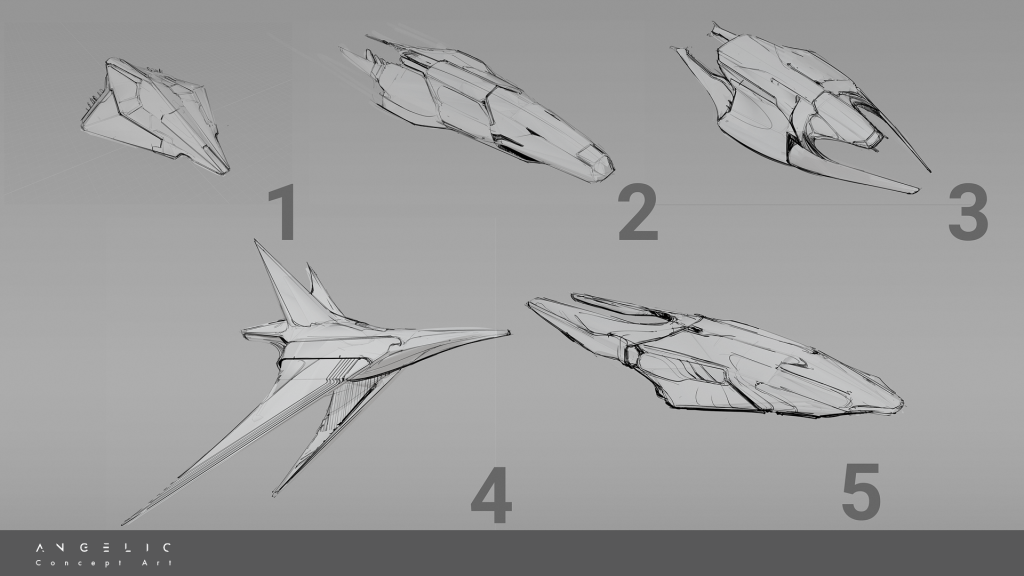 – Early sketches of Osiris. You might want to explore the form as a first step. So we were playing with some silhouette designs to find the appropriate form for the ship. – 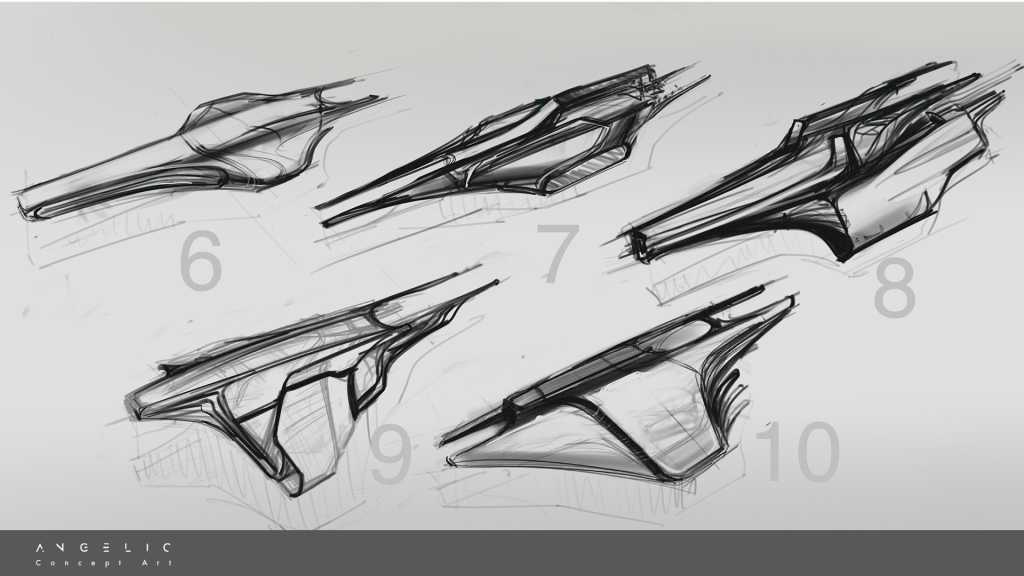 – We quickly realized we hit the sweet spot with the 9th and 10th variations. So decided to focus on these forms, thus the second phase of the conceptualization work began. –

Once the form is selected, we were ready for details. Picking colors, deciding about the texture… Apart from the silhouette, we were also constantly looking for unique design elements to make the ship even more spectacular and distinctive.

Then Emre Aktuna, our concept designer, came up with a brilliant idea: Wing tails! 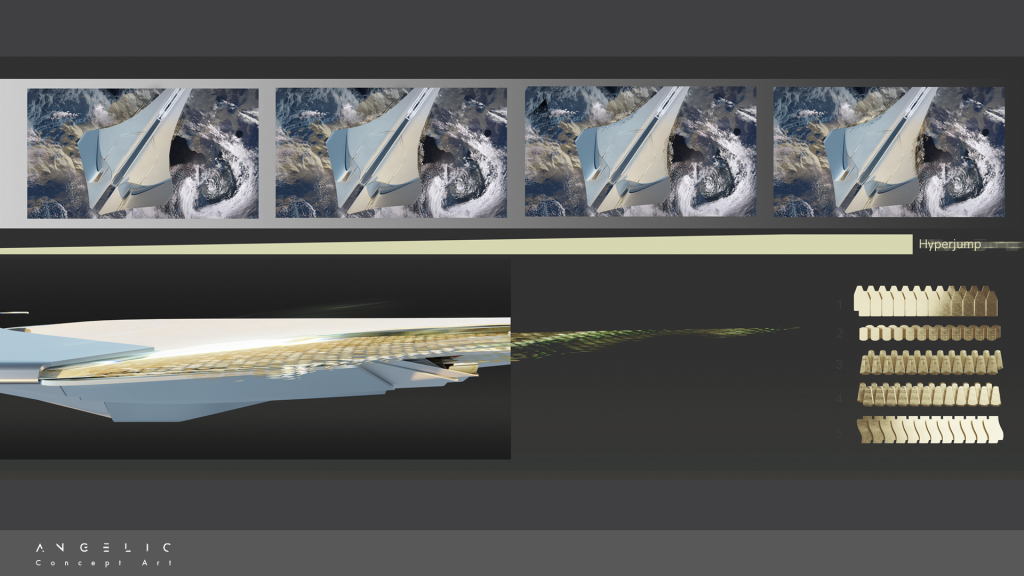 – These wing tails would enhance the ship’s unique essence, as well as serve as a cool design element and visual effects material. We all fell in love with the idea, and the only problem was achieving this in-engine in real time. –

Lord of Dead and Rebirth

We realized we still did not pick a name to the ship on that point. I spent some time to find a proper one, but once I came up with the name of Osiris, everybody liked that name. Why? Its metaphorical meaning was cool and appropriate, and its mythological relevance with Iset (Isis) was quite fitting.

Osiris has a lot of compartments. We only are able to show you the command information center, or CIC in short, during the Kickstarter campaign. Depending on our speed, we want to show you its massive corridor as well. That corridor is a hallway that leads different rooms such as your companions’ private quarters, core room, ship’s very own bar, prison, lab, docks, etc.…

Each compartment of Osiris is significant. Companions’ own quarters are their homes, each one of them will be different and unique, and will present tons of role-playing options. 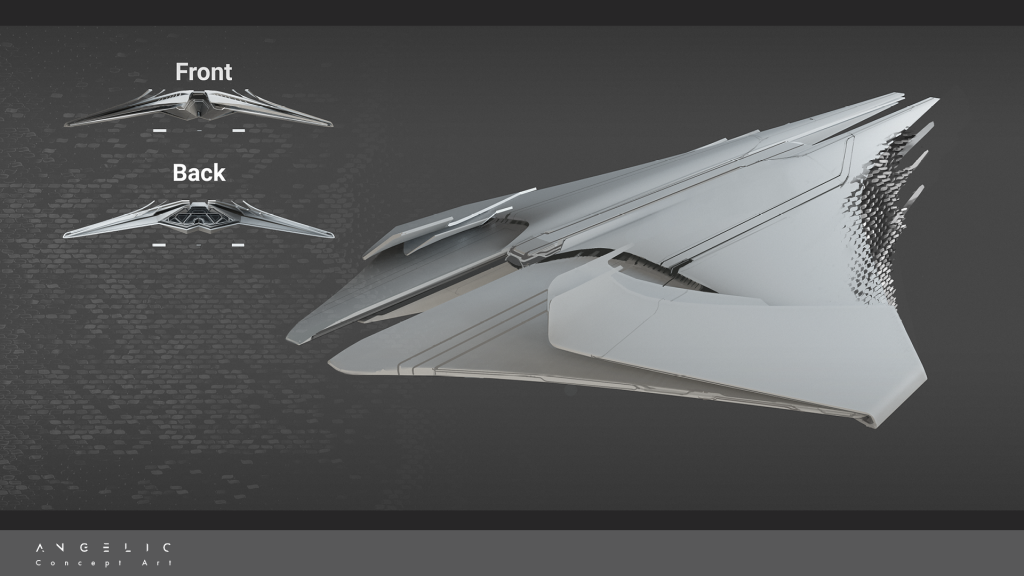 Ship’s bar is also a cool place to kill some time, but also an important area to enhance your relationships with your heroes, sometimes heal some wounds, and of course mostly for fun. Also, I am trying to be incredibly careful here not to give any early spoilers but, our bar will have awesome music…

Prison, lab, docks, and core room will also present additional functionalities. However, we do not want to overpromise anything, so all these rooms and mentioned features depend on our budget. Hero quarters and the bar (it even has a cool name: The Pit) have the priority.

I will be discussing some of these rooms in more detail later, especially the bar and hero quarters. Also, we spend some time on heroes (companions) and how they play a significant role in this game. This is just a beginning to our journey to the gameplay and the narrative side of the project.

To conclude this diary entry, I want to briefly talk about our goal with Osiris. Commanding a cool spaceship and venturing forth into the vast, dark, and frightening, yet curious deep space was always my dream. It is obvious that I cannot personally experience this in my lifetime. At least, though, thanks to Angelic, we can enjoy a similar experience virtually.

Even the possibility of wandering inside my ship, enjoying small and smart design details of its architecture, looking to the infinite blackness of the space through the glass corridors of the ship, and drinking with my friends after a challenging mission is so thrilling. So inspiring.

Yes, inspiring. I think that is a perfect keyword for Osiris. That is what we are trying to achieve. I hope you also admire what we are doing here, already inspired by the game, and will support us to achieve our dreams.